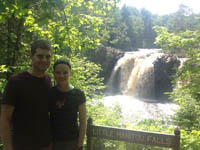 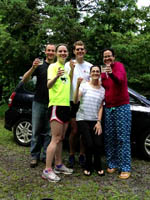 How did those kids get engaged anyway?

Well, kids, let me tell you!

Paul and Laura were camping with friends (like they sometimes do.) They traveled to Pattison State Park in Wisconsin in late June, a wonderful time to go camping in the upper midwest.

Early Saturday morning, they decided to go for a three mile trail run (despite the rain the night before that might have left the trails muddy and Paul's plans ruined.) An inpatient Laura tried to hurry Paul along as he packed the ring in a ziplock bag and padded it with tissues (can't be too safe with that! If fact, had there been a safe available, Paul might have run with that.)

They ran along a lake and stream, over scenic bridges, and saw a baby deer cross the stream. Even nature was excited for the engagement-to-be! It was a pleasant run and Paul didn't even trip once!

At the turnaround point, they stopped at Little Manitou Falls. Paul fumbled for a second to pull the meticulously wrapped ring from his pocket, and proposed to Laura in front of the waterfall. Luckily for him, she said "yes!" Any other answer would have made for a long run home.

The two then happily made their way to the campsite where their friends, who had just woken up, were waiting with a champagne toast.

The rest of the day was spent lazy canoeing down the Brule River, grilling at the campsite, and calling family whenever either Paul or Laura's cellphones got more than one bar of rural Wisconsin cell service.